Donate to our Foundation

Bay Ballet Arts & Dance Foundation
Join and shop with AmazonSimile to support our Organization. Please, visit the site and sign up!

Bay Ballet Academy’s Sleeping Beauty premiere was on May 21, 2017 at 2:30 p.m. & 6:00 p.m. at the Historic Hoover Theater. Both performances were sold out, and the audience was very impressed by the quality of dancing, costumes, and sets. All of our students from pre-ballet to adults showed a great deal of improvement and concentration. We are proud to say that our Academy’s production is one of the best in the nation. 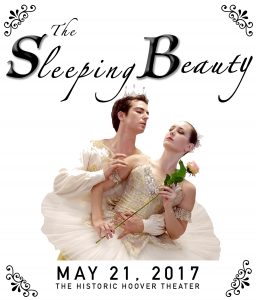 King Florestan XXIV and his Queen have welcomed their first child, Princess Aurora, and declare a grand christening ceremony to honor her. Six fairies are invited to the ceremony to bestow gifts on the child. Each fairy represents a virtue or positive trait, such as beauty, courage, sweetness, musical talent, and mischief. The most powerful fairy, the Lilac Fairy, arrives with her entourage, but before she can bestow her gift, the palace grows dark. The evil fairy Carabosse arrives with her minions. She furiously asks the King and Queen why she had not received an invitation to the christening. The blame falls to a maiden of honor who was in charge of the guest list. Carabosse gleefully push her down to the floor, before placing a curse upon the baby princess as revenge: Aurora will indeed grow up to be a beautiful, healthy, delightful young lady, but on her sixteenth birthday she will prick her finger on a spindle and die. The King and Queen are horrified and beg Carabosse for mercy, but she shows none. However, the Lilac Fairy intervenes. Though she does not have enough power to completely undo the curse, she alters it, allowing the spindle to cause a peaceful 100-year sleep for the princess, rather than death. At the end of those 100 years, she will be woken by the kiss of a handsome prince. Relieved that Aurora’s life will ultimately be spared, the court is set at ease.


It is the day of Princess Aurora’s sixteenth birthday. Celebrations are underway, though the King is still unsettled by Carabosse’s omen. The townsfolk perform an elaborate waltz, and Princess Aurora arrives afterwards. Presently, a cloaked stranger appears and offers a gift to the princess: a boquet of flowers. Aurora is delighted with the flowers. As predicted, she pricks her finger on the spindle that was hidden within the bouquet. While initially appearing to recover quickly, she falls into a swoon and collapses. The cloaked stranger reveals herself to be Carabosse, who believes that her curse still stands and that the princess is dead. Once again, the Lilac Fairy quells the hubbub and reminds the King and Queen that Aurora is merely asleep. The princess is carried off to bed, and the Lilac Fairy casts a spell of slumber over the entire kingdom, which will only be broken when Aurora awakens.


One hundred years later, Prince Désiré is at a hunting party with his companions. He is in a mopey mood, unhappy with his bossy countess girlfriend. His friends try to cheer him up with a game of blind man’s bluff and a series of dances. Still unhappy, he asks for some time to himself, and the hunting party departs. Alone in the forest, he is met by the Lilac Fairy, who has chosen him to awaken Aurora. She shows him a vision of the beautiful princess, and the prince is immediately smitten. The Lilac Fairy explains the situation, and Désiré begs to be taken to the princess. The Lilac Fairy takes him to the castle and guides through the deep forest until at last, they reach the hidden castle. Carabosse makes one last attempt to cement her vengeful curse, but the Lilac Fairy and the prince manage to defeat her together at last. Once inside the castle, Désiré awakens Aurora with a kiss. The rest of the court wakes as well, and the King and Queen heartily approve when the prince proposes marriage and the princess accepts.

The royal wedding is underway. Guests include the Jewel Fairies and of course the Lilac Fairy. Fairytale characters are in attendance, including Puss in Boots and The White Cat, Bluebird Princesses, Little Red Riding Hood / Wolf, Cinderella and Prince Charming, and others. Aurora and Désiré perform a grand Pas de Deux. The prince and princess are married, with the Lilac Fairy blessing the union. The ballet ends with a grand apotheosis (apothéose) where all the characters come together with a tableau depicting the Sun God, Helios and King Louis XIV.