Donate to our Foundation

Bay Ballet Arts & Dance Foundation
Join and shop with AmazonSimile to support our Organization. Please, visit the site and sign up! 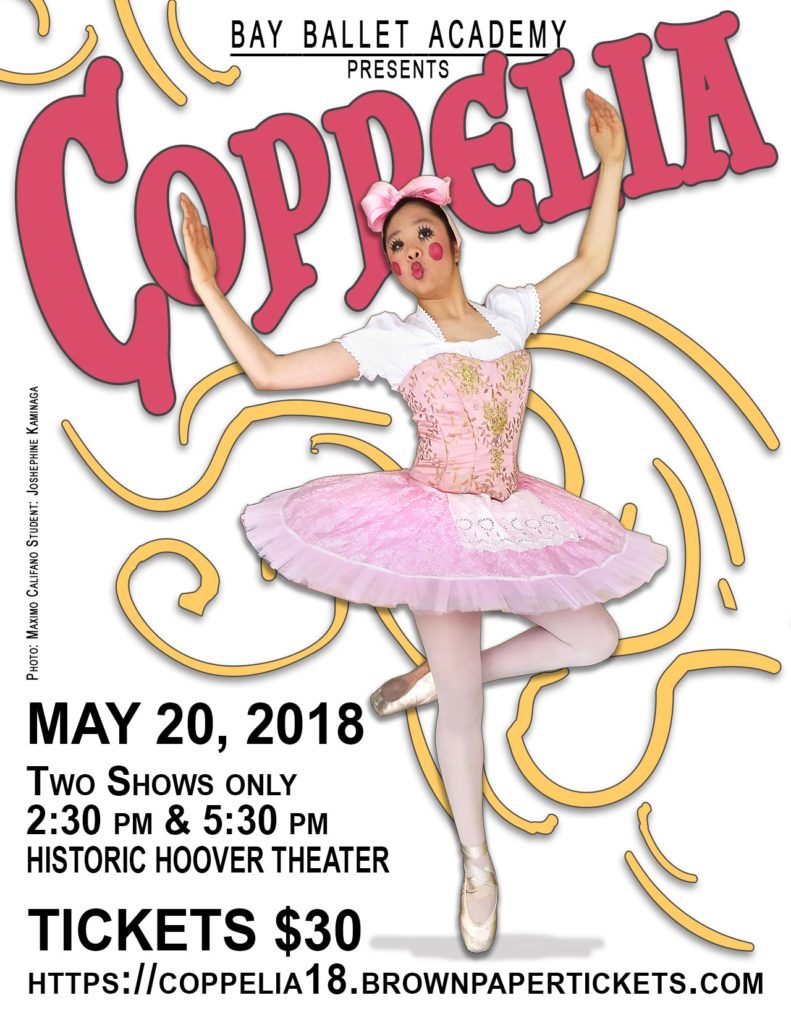 Doctor Coppélius is putting the finishing touches on Coppelia after setting her out to dry on the balcony of his house. Coppélia appears to be reading a book. She seems so real that Doctor Coppélius is, himself, almost unaware that she is only a doll. In his loneliness, the fanatical dollmaker has created Coppélia to be his companion and secretly dreams of discovering a way of bringing her to life.

A group of peasant friends are off to their work in the fields. Seeing Coppelia ,who sits motionless on the balcony of a nearby house, they dance to attract her attention and wonder why the reading figure does not respond. Like everyone else, they believe the doll to be a living person.
Doctor Coppélius, a mysterious inventor, comes out of his house to adjust the doll’s mechanism, which he sets in motion. Coppelia stands up and waves in the direction of the friends. At this moment, a group of children enter chasing butterflies.
Later on, Dr. Coppelius leaves his house and is heckled by a group of girls. After shooing them away, he continues on without realizing that he has dropped his keys in the melée. The friends find the keys, which give them the idea of learning more about Coppélia. They decide to enter Dr. Coppelius’ house.

The friends find themselves in a large room filled with people. However, the occupants aren’t moving. The girls discover that, rather than people, these are life-size mechanical dolls. They quickly wind them up and watch them move. They also find Coppelia behind a curtain and discover that she, too, is a doll.

Dr. Coppelius returns home to find the girls. He becomes angry with them, not only for trespassing but for also disturbing his workroom. He kicks them out and begins cleaning up the mess. The inventor wants to bring Coppélia to life by reading his magic spell.

The town is prepared for the celebration of a new bell. Amid the preparations in the village square, an irate Doctor Coppélius arrives to denounce the event and heap scorn upon the town people. The friends, after all, created havoc in his life. He is calmed by priest and is given a sum of money to cover the damages to his property and person. Coppélius is also invited to the celebration.  Doctor Coppélius forgets his dolls and his loneliness and joins in the festivities.